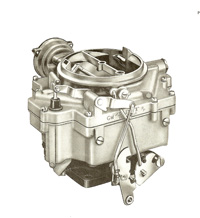 The Rochester 4-Jet carburetor was a downdraft four barrel carburetor produced by the Rochester Products Division of General Motors from 1952 until 1967. It was first used on Oldsmobile and Cadillac in 1952 and was used on GM, Packard and Studebaker cars and trucks into the mid 60's. The last application was on Chevrolet trucks in 1967.

The 4-Jet consists of a pair of two barrel carburetors back to back, with the primary side being similar in construction to the 2-Jet (2G, 2GC, 2GV) carburetor. 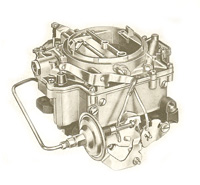 In the 1950's Rochester 4-Jet carbs and Carter WCFB's were used interchangeably on some applications. Many of these early 4-Jet carburetors used the same very small mounting flange as the WCFB carburetor (for example, Cadillac). Some later 4GC's used a larger flange size similar to that used on Carter AFB's, but narrower than the square bore Holley flange. When interchanging GM carbs of the 50's and early 60's, check the flange size on the manifold carefully.

Although the 4-Jet is generally referred to as a 'square-bore' carburetor, many had substantially larger secondary bores than primary bores, especially in early 1960's Buick and Pontiac versions. Also, while most 4-Jets had a cast iron throttle body, some of these Buick and Pontiac carbs had aluminum bases.