The Carter Y series carburetors were 1-barrel downdraft (YF, YFA, YS) or sidedraft (YH) carburetors used at various times on most makes of American cars and trucks, usually on 4 or 6 cylinder applications.

The chokes on these carbs were usually hot air operated automatic chokes, though some earlier models (and all the military models) were produced with manual chokes.  Late model carbs (late 70's - 80's) sometimes had electric choke coils.

The Carter YH sidedraft carb (kit CK456) was used on a triple carb installation on early Corvette 6 cylinder engines and turbocharged Corvair applications as well as Nash, Dearborn Marine and others.

In the 1980's, feedback (computer controlled) versions of the Carter YFA were used on Ford and AMC cars and trucks. 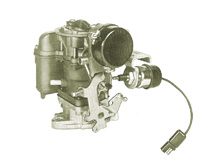 This model uses a hot air choke and features an idle stop solenoid. 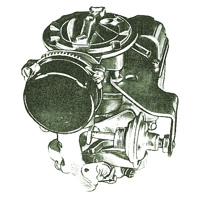 Dashpots were used to prevent stalling when the gas pedal is suddenly released when braking (on automatic transmission cars), to improve shifting on manual transmission vehicles, and, in later models, to control emissions. When the throttle is closed quickly, the mixture can become too rich because of the high vacuum under the throttle plate.  In this case, the dashpot served to slow the closing of the throttle plate, decreasing emisions. 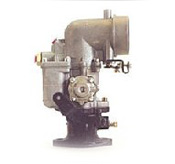 Carter YF-YH parts identification.  The part numbers on this sheet correspond to the numbers in the Carter carburetor specifications manual.