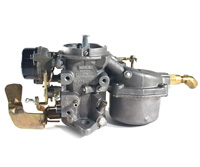 The Carter RBS was a small, single barrel downdraft carburetor that was used on a variety of 4 and 6 cylinder applications, including multiple carb setups on OMC marine engines. This carb was produced in the 60's and early 70's.

It is unusual in that it has a separate, steel float bowl suspended off the side of the carb. The advantage of this was that the fuel would stay cooler, resulting in more consistent metering.