Quadrajets were used as original equipment on many vehicles from 1965 to 1990.  Over 100 million have been produced.

1966 Rochester Quadrajet used on 327 Chevrolet engine with manual transmission, no. 7026203 - number is on the blue 'bottle cap' visible on the throttle side

The QJet is a large 4 barrel carburetor that has a small primary side for fuel economy and good emissions and a large secondary side for good performance.  QJets have a maximum airflow of from 750-800 cfm. Because the secondary side of the Qjet opens according to the airflow requirements of the engine, the same basic carburetor size can be used on a large range of engine sizes. The basic 750 cfm QJet casting is used from 231 CID to over 400 CID - the big secondary air valves open only as the engine breathes. For example, on a mild 350 Chevy the air valve will never open all the way - because the motor can't use more than 600 cfm or so. 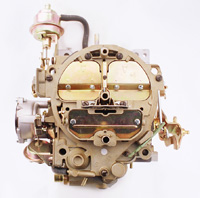 M4MC Quadrajets have an integral choke and a different airhorn design; also, the throttle shafts are longer than in 4MV carbs. Starting in 1968 carb numbers were stamped on the driver's side, near the back.

Choke parts, primary metering rods and throttle shafts are not interchangeable between 4M and M4M carbs. 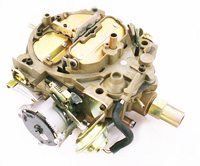